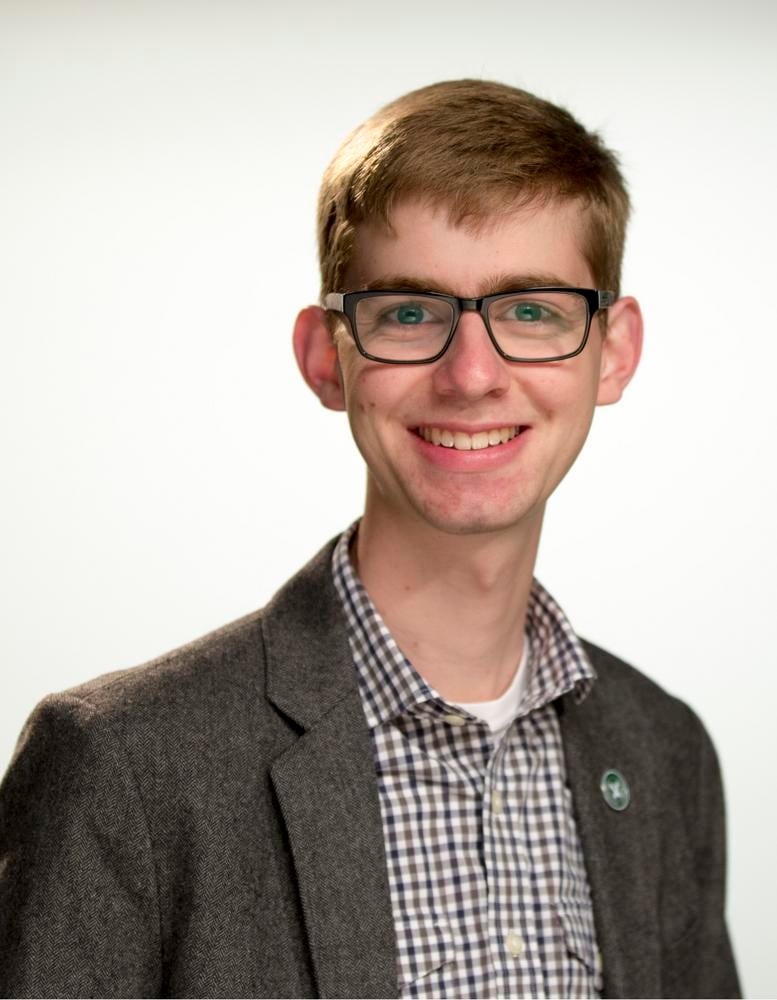 Software development is my passion. Ever since a young age, I have been writing code from simple science fair projects making use of the Arduino Platform, to production code that serves requests from thousands of customers from across the globe every day. Most of my expertise lies in Java and Python, but I have some experience in Front End development, although I would not consider it my strong suit. Across all of the work I have done, all of it has been focused on improving the customer experience, either by developing new solutions for old problems or optimizing existing processes to bring delight to customers. 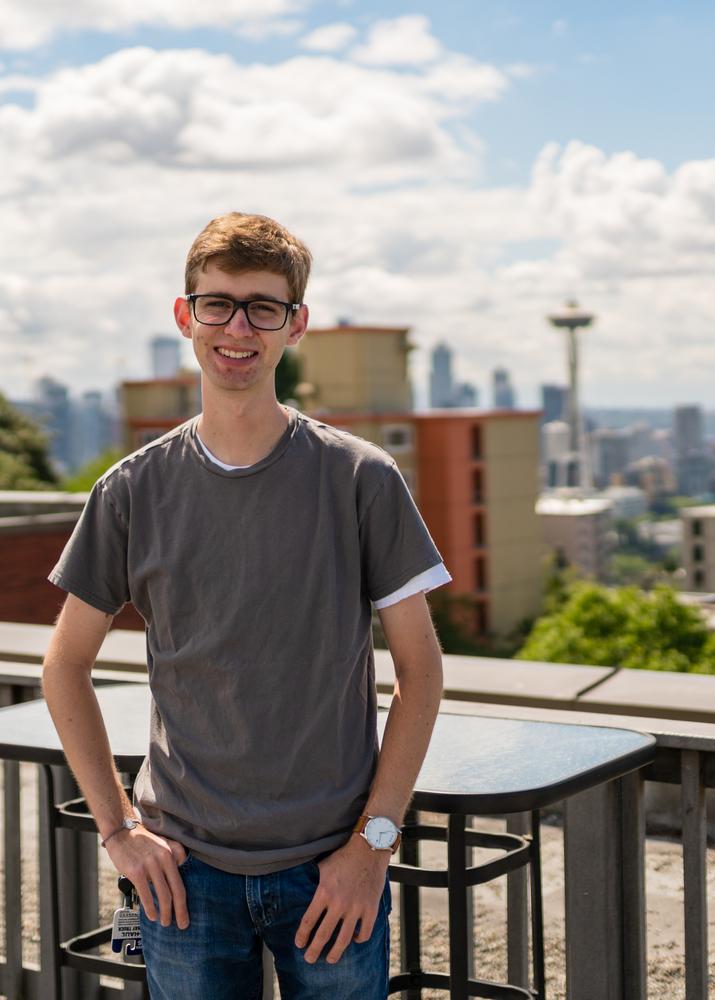 Currently, I am a Systems Engineer at Cloudflare where I work on the core API platform team.

Previously, I was a Senior Software Development Engineer at Amazon Web Services, where I worked on EC2 Image Builder, a Public AWS Service which simplifies the creation, maintenance, validation, sharing, and deployment of Linux or Windows Server images for use with Amazon EC2. I was primarily responsible for setting the service's technical direction and supporting the team of eight other engineers in designing and building new features and components for the service. Additionally, I supported the larger EC2 Commercial Software Services organization (which owned EC2 Image Builder) in the C2 space. And if that was not enough, I was also an AWS Call Leader. Whenever there is a large, customer impacting event within AWS, call leaders get engaged to help drive recovery. While it could be very stressful in the moment, it was one of the most rewarding parts of my job.

I originally joined Amazon as a member of the Elastic Beanstalk team, which helps customers deploy their web applications written in many supported languages, including Java, .NET, PHP, Node.js, Python, Ruby, Go, to customer-owned AWS Resources. I rejoined Amazon in July 2018 after interning with the Elastic Beanstalk team during the Summer of 2017, where I developed a beta version of a new internal console to be used by the team.

While at San Diego State University, I worked at Instructional Technology Services (ITS) as a Faculty Support Lead Student Assistant. ITS provides support for all learning technologies used at the university, which includes not only the Learning Management System (in this case Blackboard) but also all the technology found in the classrooms. Outside of my day-to-day operations responsibilities, I also worked as a Full Stack Developer, developing a handful of web-based tools to facilitate Faculty Support and improve our daily operations.

I graduated from San Diego State University with my Bachelor's of Science in Computer Science in May 2018. While at San Diego State, I was a member of the Weber Honors College where I pursued a minor in Interdisciplinary Studies. As a member of the Honors College, I worked not only with students in my discipline but a diverse group of students on a wide array of projects outside of my major. 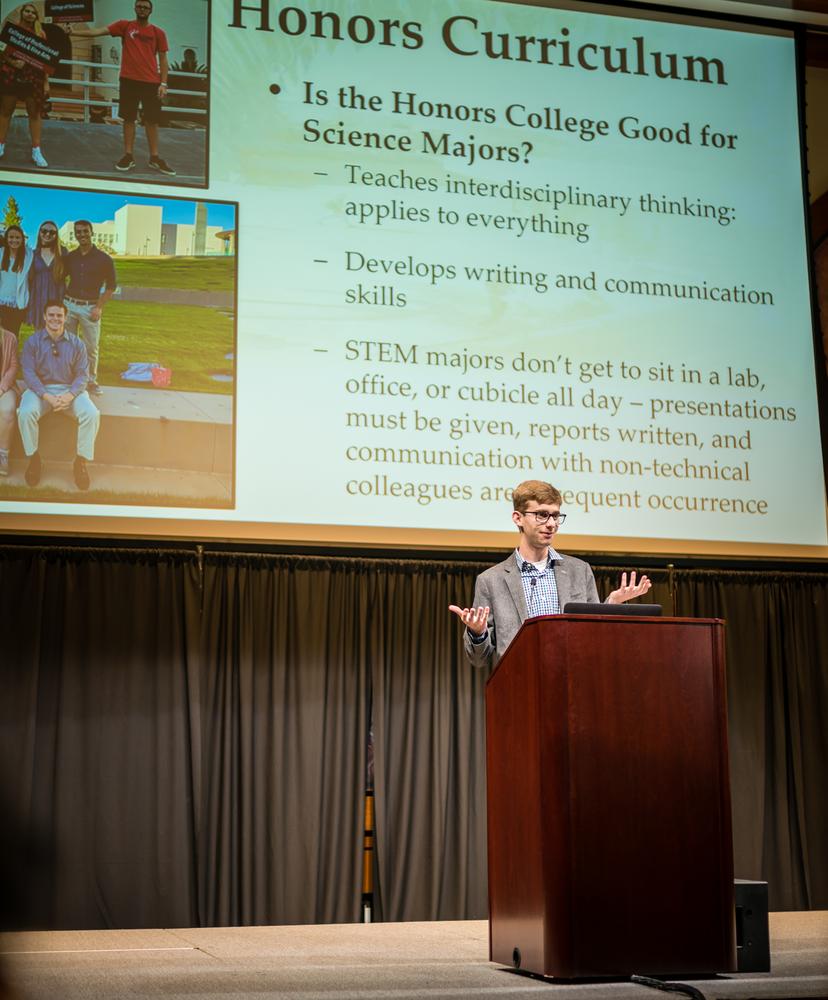 Before COVID, you could find me at Bike Works most Sundays, taking part in their Volunteer Repair Parties (VRP). Bike Works receives donations of bikes of all sizes throughout the year, but often the bikes are not in the best shape or even safe to ride. During VRP, volunteers focus on Kids' bikes to fix them (flat tires, rebuilding bottom brackets, etc.), clean them up, and get them ready to be given back to the community.

Additionally, I am the Information Technology Coordinator for IDEAL (International Deaf Education, Advocacy and Leadership) which supports and empowers deaf children and youth around the world through human rights advocacy and the promotion of education, empowerment, and leadership.

Previously, I worked together with CodeDay where I lead in-person events as a Senior Code Evangelist™. CodeDay® has helped bring tech education to 20,000+ students in 40+ cities worldwide, with a highly diverse attendee population (43% women; 38% low-income; 28% minorities). 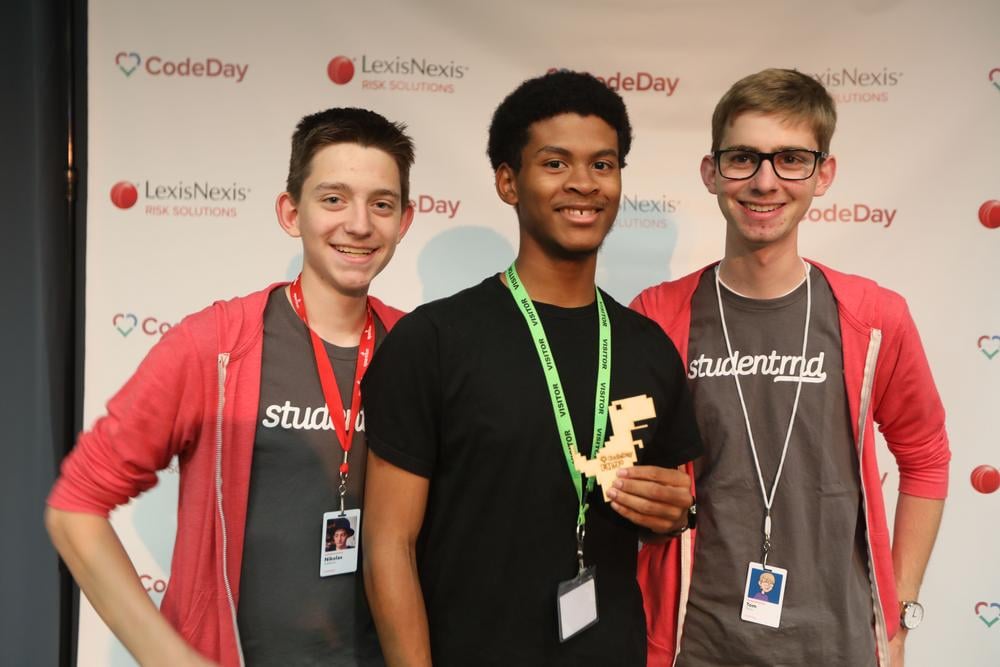 From Degree to Day Job

How to get your foot in the door and where it can take you.

How did I end up with my Job at Amazon and what does it take to get in the door. This talk covers both my journey to Amazon, as well as goes over one of my favorite interview questions to ask during interviews. Not only do we discuss and solve the problem, we take it one step further and deploy the code to AWS to make a working solution. 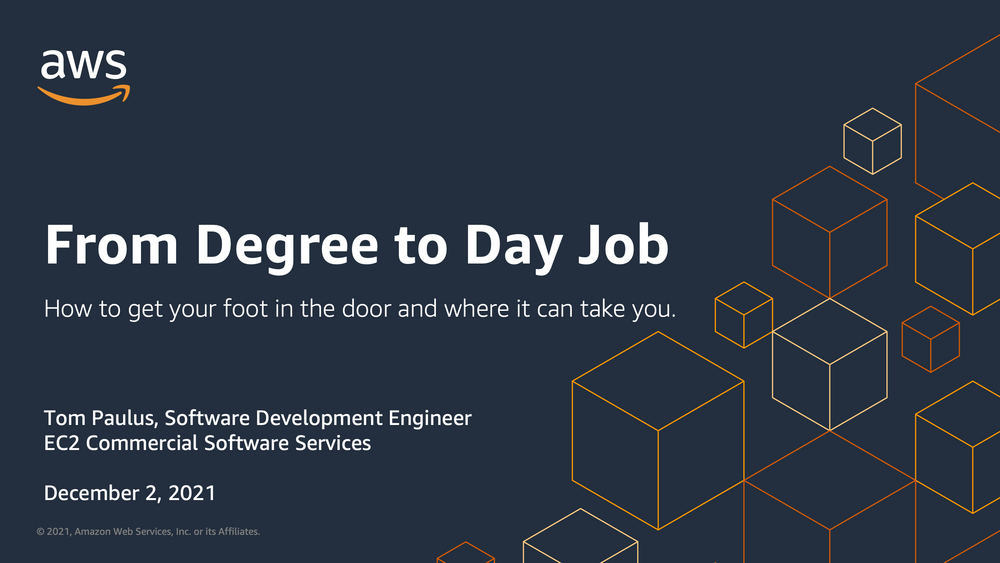 An Introduction to College

My first year as a Comp. Sci. student at SDSU

Amongst the tech community, especially those in High School, the big question is: “Is College Worth It?” While I can’t say if college is worth it, I can share my experiences from my first year as a Computer Science Student at San Diego State, a large public state university. From why I chose San Diego State, to the horrors that are graduation requirements, to the awesome opportunity I had to travel to Finland, and study at the University of Jyväskylä this past summer. College is both just like I thought it would be, but also very different. 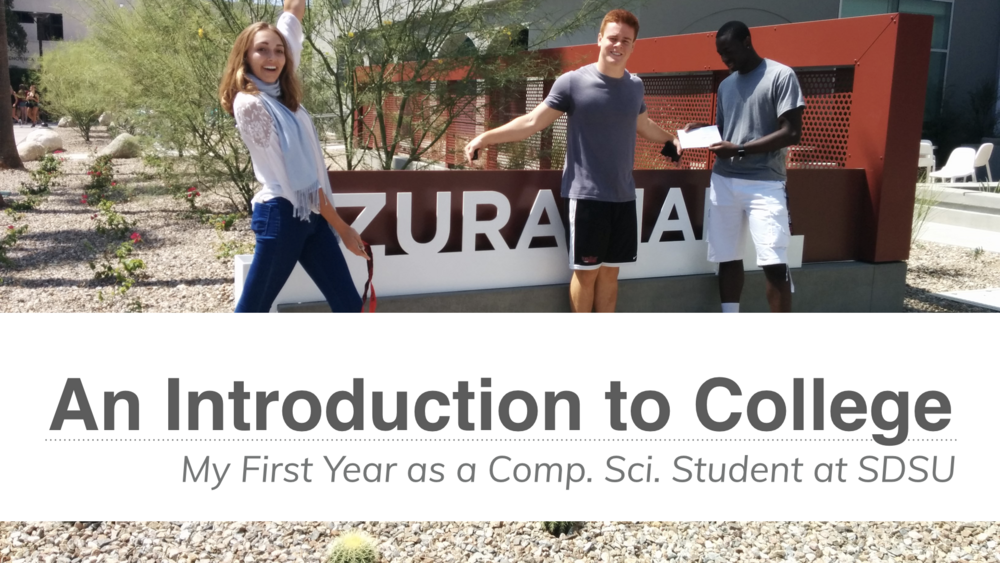 Commonly referred to as Drones, these crafts provide the pilot with the ability to capture images from a new perspective. In this talk, we will briefly discuss the basic principles and technologies that enable this gravity-defying craft to fly, then dive deeper into advanced customizations, like First Person View (FPV).

I have flown these magical devices for a few hundred hours over the last three years, and have bought and built too many multi-copters (unfortunately also known as drones). But be warned! You will leave the session, with the strong desire to acquire parts (you before didn't know existed) and build a multi-copter of your own. 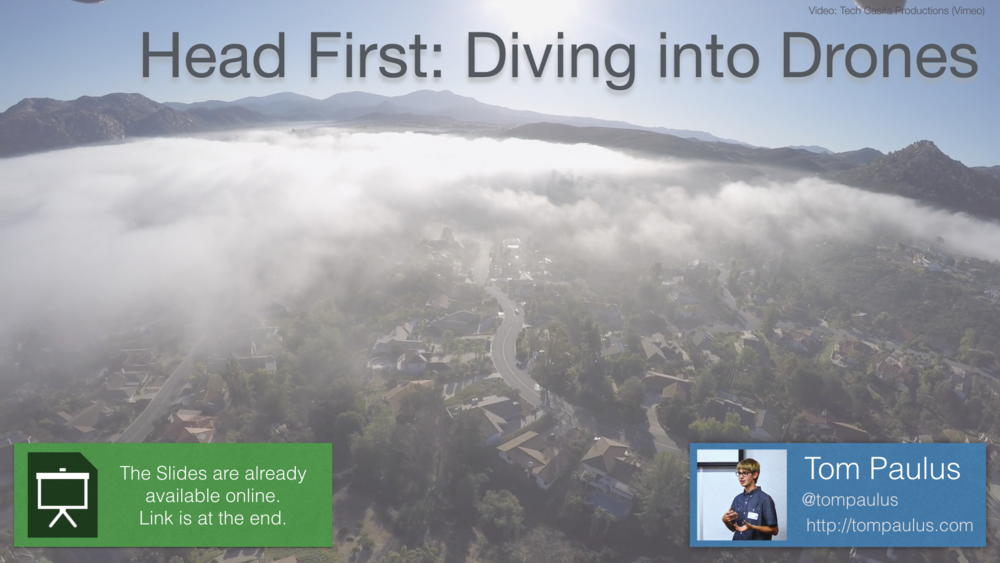 Drones, formally referred to as Unmanned Aerial Systems (UAVs), provides the pilot with the ability to capture images from a new perspective. In this talk, I briefly discuss the basic principles and technologies that enable this gravity-defying craft to fly, then dive deeper into advanced customizations, like First Person View (FPV).

We have flown these magical devices for a few hundred hours over the last two years. We have bought and built too many multi-copters (unfortunately also known as drones). Anyways, we would really love to share some of our most exciting and memorable experiences with you. But be warned! You will leave the session, with the strong desire to acquire parts (you before didn't know existed) and build a multi-copter of your own. 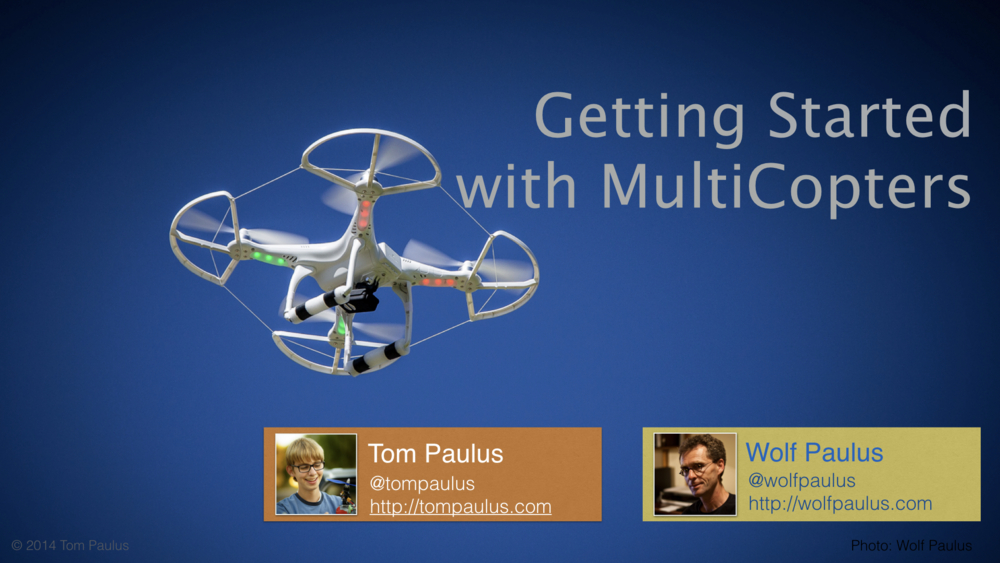 Getting Started with the Raspberry Pi

The Raspberry Pi is a small credit-card-sized Linux computer. Developers and hobbyists around the world are creating miraculous applications and projects, and now you can join them. This presentation covers the first steps to using your Pi. From the basics, like burning your SD Card to creating a Weather Reporter. Discussing GPIO Basics and simple Python tools. Communication between other components using SPI or I2C is also covered. 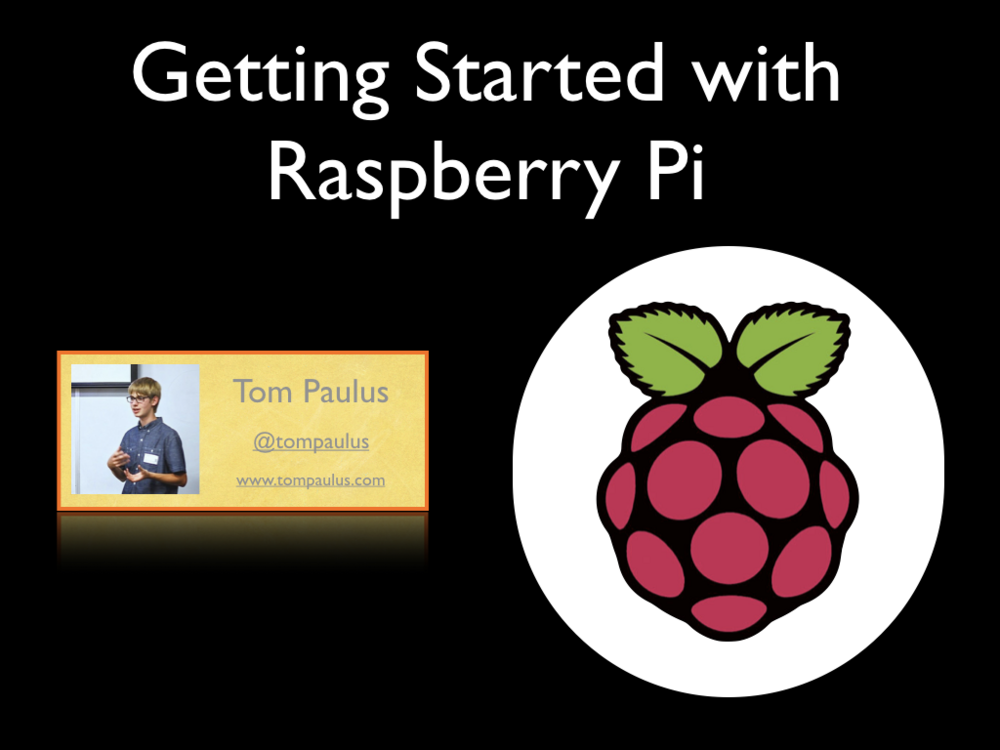